SSRIs are group of medications, that are most commonly prescribed, to treat both Major Depression and Anxiety Disorders.   Common names for this medications include Prozac, Paxil, Zoloft, Celexa, Luvox  and Lexapro.

SSRIs work in the brain by increasing the levels of  the neurotransmitter Serotonin in the brain.  This is done by the medication inhibiting or blocking the brain cells from taking up the Serotonin.  The photo below is a picture of a neurons (brain cells) communicating with one another.  The purple “reuptake plug” is the SSRI, blocking the brain from taking up the serotonin thus allowing more of the neurotransmitter to be active in your brain.

SNRIs work in the same way as SSRIs, the difference being that they also block the reuptake of  norepinephrine.  Common names of SNRIs are Cymbalta, Effexor and Fetzima.  SNRIs not only treat depression , but because to their effect on norepinephrine they are also used to treat pain.

Tricyclic antidepressants work very similar to SSRIs and SNRIs. They are just as effective for the treatment of depression and anxiety.  Tricyclic medications are not prescribed as often as  SSRIs because of their side effect profile.  Tricyclic medications are sedating, can cause dry mouth,  dizziness and problems with urination.  These types of medications  have also been used to treat pain with conditions such as fibromyalgia and migraines.  Because they  are sedating,  they are sometimes the better choice for individuals who have problems with sleeping.

There are three types of medications that are used as mood stabilizers.  Mood stabilizers help persons who have Bipolar Disorder  return to a more euthymic or normal mood.  They also help with problems such as irritability, aggression, and anger.  They may  also be prescribed as an addition to other medications to aid with depression.

Anxiolytics, with the exception of Buspar (Buspirone), are a medications which are used short term to treat anxiety.  Most anxiolytics belong to a class of medications named benzodiazepines.  Benzodiazepines work immediately to provide a sense of relief from anxiety and because of this can be very addictive.  If a person becomes addicted to a benzodiazepines the may require hospitalization to stop the medication as there are risks for serious withdrawal symptoms including seizures.

Are these medication safe?

Many people are concerned about these medications and how they effect the brain.  Recent research provides that medications for mood, with the exception of benzodiazepines,  increase the neuroplasticity of the brain.  Research has provided that a person who is depressed, upon death,  has a smaller brain due to a lack of neurotransmitters in the brain.  The photo below provides a picture of a neuron in a depressed normal and in the treated or medicated state.  This increase in neurotransmitters makes one’s brain more full and robust (neuroplasticity).  It should also be noted that exercise, although temporary,  will provide the same effect. 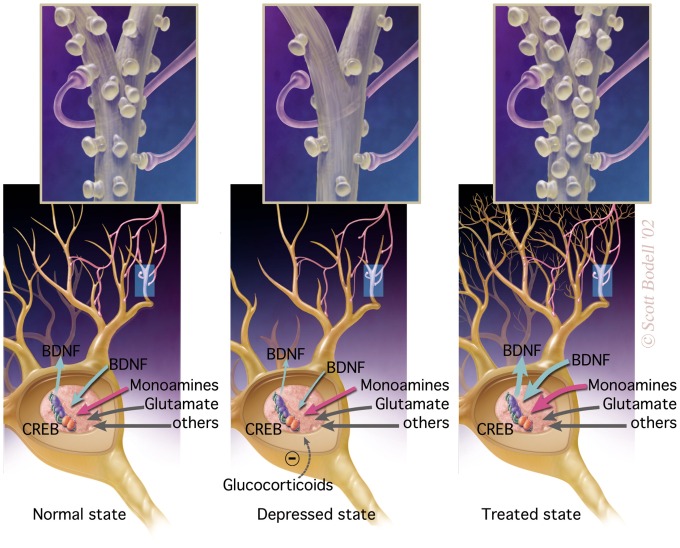 This is a short review of some of the medications that are used to treat psychiatric disorders.  If you feel you may be in need of a medication for depression, anxiety or mood, you should contact your medical provider.